A few weeks ago, we came across “What Happened when Mommy Got Cancer“, a children’s book written by Mathuin, a seven-year-old boy of Lebanese origins and the son of Jocelyn Smith who went through breast cancer treatment. Having to go through such an experience is difficult for any family member of those diagnosed with breast cancer, but probably even more so for young children who really struggle to understand and cope with it. It’s really a scary time.

Mathuin learned a lot from this experience and used writing as a form of therapy during this time. Once his mother had finished treatment and was better, he made the decision to help other children going through it by publishing this book. The end-product is a hopeful and beautiful personal story displaying wisdom and maturity beyond Mathuin’s young years that is sure to inspire any child to feel less alone. You can get to know Mathuin and the book better in this TV interview.

We took a few minutes to talk with the illustrator of this book, Ranya Ghazaly, who while tackling this sensitive content and translating it into illustrations, developed some invaluable insight on approaching the subject of cancer for children: 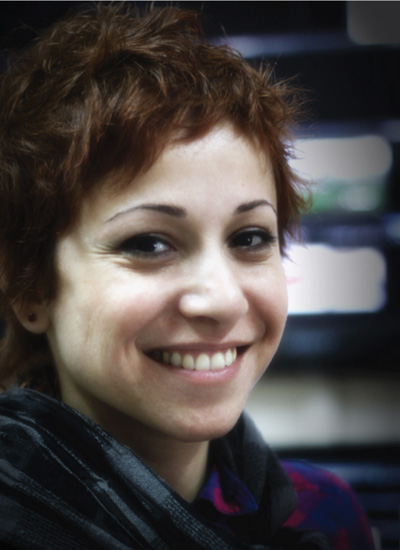 Ranya Ghazaly – the Illustrator of “What Happened When Mommy Got Cancer”

1. How was your experience with illustrating “What Happened when Mommy Got Cancer”?

“What Happened when Mommy Got Cancer” is a children’s book about a mother who is fighting breast cancer and it shows how this affected her own children’s daily life.

Illustrating this book was a unique, challenging and beautiful experience for me.

It was unique because her son, Mathuin, who is seven-years-old at the time wrote it and because it is about a sensitive subject: cancer.

It was challenging because the illustrations needed to reflect a positive ambiance and help other children in the same situation feel better and stronger especially as the situation is delicate, hard and sad.

It was beautiful to know such positive people full of hope and love.

2. What made you decide to take on this project?

It was out of the blue. The founder of Beirut Animation Network (BAN), Alain Nasnas, called and asked me if I would be interested in illustrating a new book. BAN was responsible of finding the right illustrator of this book, so he suggested me.

In such situations, I always read the book first. If it’s something that I don’t think I am suited for after the first few chapters or lines, I’ll call and say this book isn’t my strong suit. But in this case, I immediately accepted after reading the title and knowing that a seven-year-old child had written it.

It was a new and interesting challenge for me to work on a book by a seven-year-old child who wanted to share a message of hope with other kids passing through the same situation.

3. Was this the first time working on a children’s book with such a sensitive subject matter?

I believe that all children’s books are a sensitive matter to deal with. Illustrations have a big psychological effect on children and that’s why you have to consider these factors sensitively while illustrating for them.

It was, however, the first time I work on a book with such a serious and delicate subject matter that was not only dedicated for kids but experienced by a child having gone through it.

4. How involved were you in the book production process?

While the illustrations were being worked on, Mathuin, Jocelyn (his mother) and myself determined an overall art and mood direction for the book.

5. The characters in the book are based on Mathuin and his family but it appears so even in the way they look. Was this a conscious decision and did Mathuin know in advance how he wanted you to portray the family’s experience with cancer?

Yes, Mathuin wanted the characters in his book to look like his family, but in a more cartoon-ish, simple and fun-to-look-at way. So they sent me one picture as a reference, representing the whole family gathered, with the remark: “We hug a lot in this family”.

It was enough for me to create the overall look-and-feel of the family characters and the rest of the book illustrations.

6. Did you face any challenges with tackling the subject of cancer in this book, especially when it came to portraying such difficult and emotional scenes as the mom sick in bed or losing her hair?

At first, I thought it was going to be easy until I received a note from Jocelyn about one of the illustrations, saying: “The boy’s expression is too strong. It brought tears to my son’s eyes immediately.”

Her words hit me deep.

While the main subject is cancer, the illustrations should reflect a positive atmosphere full of hope and love.

The challenge became bigger in every scene, but Jocelyn and her family’s positive attitude was a great inspiration for me. I simply translated their beautiful soul and positivity into illustrations. It even made the hair loss section one of the most fun stages of all!

7. As one of the few children’s books currently available in the market here in Lebanon, how have other children reacted to the book and do you feel it has helped them cope better?

The book has gotten a good reaction from other children, especially from those living through the same situation. It helped them know they were not alone and that other families are struggling with the same issue.

The most important part is that it showed them how to have hope and be positive. It made it easier for them to understand cancer and how it affects families and their lives.

“What Happened when Mommy Got Cancer” is currently available in all Antoine bookstores in Lebanon for $20 with part of the proceeds of its sales being donated to the Conquer Cancer Foundation.